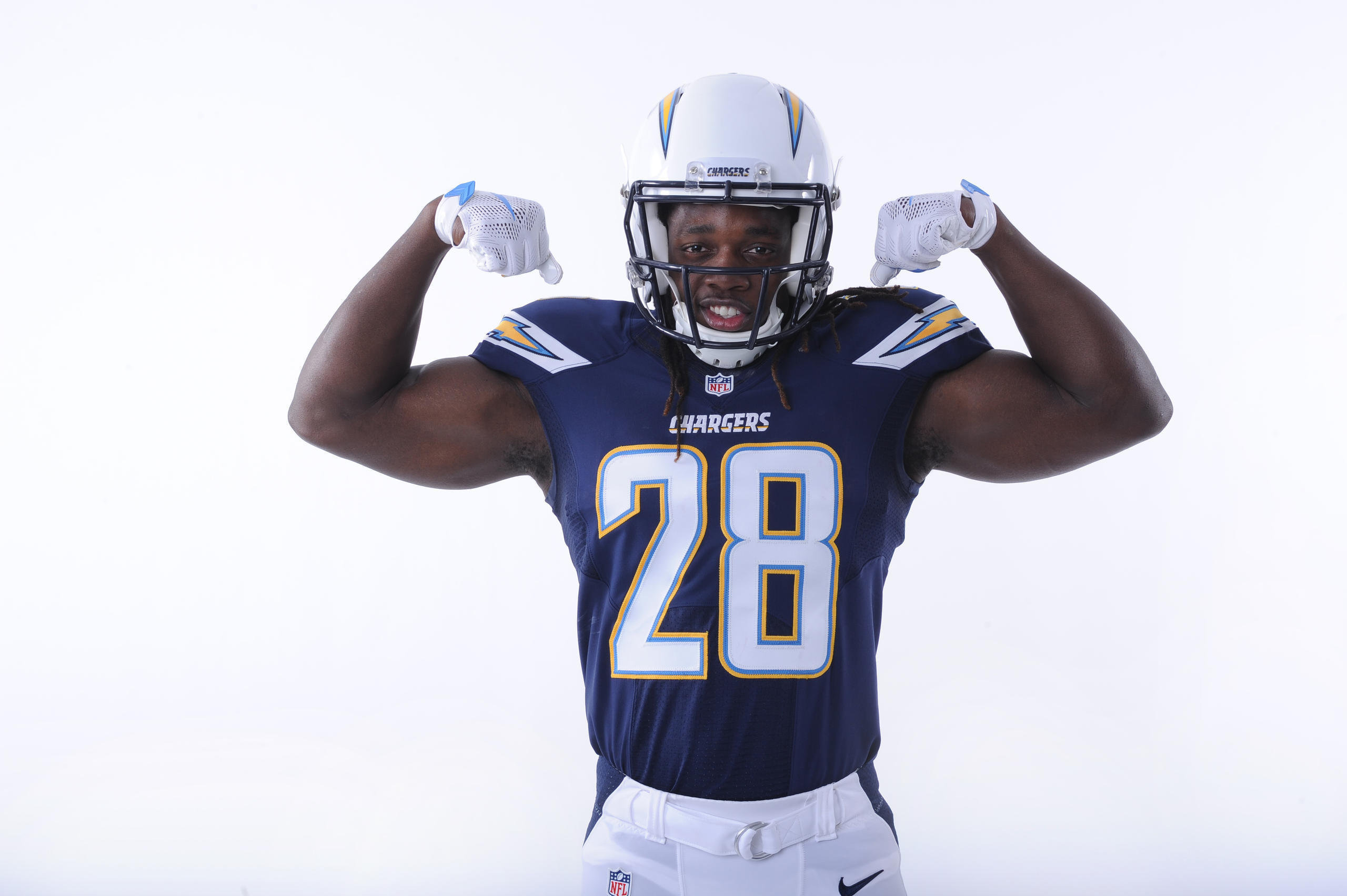 Week 4 is upon us, and we’re somehow almost a quarter done with the 2016 season already. Hopefully you’re sitting pretty at 3-0, but even at 0-3 you should never lose hope. Check out our Week 4 rankings to make sure your lineup is in the best shape possible to get you that all important win.

2. Le’Veon Bell (PIT) vs. KC – Tomlin has already Bell will “see a heavy workload” this weekend, so those who waited patiently these past three weeks should be ready for a true explosion.

3. Melvin Gordon (SD) vs. NO – Gordon operated as the true featured back in Woodhead’s absence, receiving 7 targets in addition to 16 carries. He now squares off with a Saints defense that surrendered 194 yards and 3 TDs on the ground, plus 8 catches, 102 yards, and another TD in the air to Devonta Freeman and Tevin Coleman. A 30+ FP day seems almost inevitable if Gordon maintains his stranglehold on the backfield touches here.

Updated – Gordon might be without three of his starting linemen; a major reason for his 2015 dud was an injury-depleted line, so the running room might not be as plentiful as originally speculated. The mettle of the pathetic New Orleans D shall be tested. I can no longer rank Gordon ahead of surer plays like Lev and DJ, but the upside is still enormous here.

4. Ezekiel Elliott (DAL) @ SF – Elliott looked markedly better and more patient as a runner vs. the Bears Sunday night; the TDs are bound to come. Elliott might see even more work with Dez Bryant potentially limited.

7. DeMarco Murray (TEN) @ HOU – We’ll get our first look at the post-Watt defensive line, and you can bet Exotic Smashmouth will be ready to test them.

8. Lamar Miller (HOU) vs. TEN – The touches have been there, but the effectiveness of yesteryear is gone. An explosion will come, and Miller remains a prime buy-low candidate.

9. LeSean McCoy (BUF) @ NE – Love the form Shady showed last week, I’m just worried Belichick — the master of eliminating an offense’s top weapon — will scheme to erase McCoy from this game.  Given his versatility, the locked in RB1 should still produce.

10. Todd Gurley (LA) @ ARI – This defense showed some poor pursuit angles against Shady last weekend, and you can bet the Rams will do everything they can to control the clock. Gurley might just be emerging out of this dark hole, making him a prime buy low if his owners are on the ledge.

15. LeGarrette Blount (NE) vs. BUF – The attack will likely be run-heavy regardless, but if Jacoby Brissett is starting, Blount will slide in ahead of Christine Michael.

16. Spencer Ware (KC) vs. PIT – ESPN Chiefs reporter claimed it’s “difficult to picture” Charles playing against the Steelers this Sunday, giving Ware a juicy matchup with a Steelers defense that has yielded the 4th most PPR points to backs this season. He seems to have fallen off the radar a bit, making him a sneaky DraftKings option. If reports change on JaCha, Ware will be adjusted accordingly, but for now treat him as a featured back with a ripe matchup.

Updated – Jamaal Charles will indeed be active, lessening Ware’s initial appeal and upside.  With Charles only set to receive 10 carries, Ware can still be started by owners and remains a solid bet for a TD. His ceiling is slightly capped now, however.

21. Devonta Freeman (ATL) vs. CAR – He’s been under double digit fantasy points in all contests not against the Saints powder puff defense, so consider this the ultimate Sell-High time.

22. Latavius Murray (OAK) @ BAL – Murray has scored a TD every week thus far, which should remain fairly consistent given this powerful offensive line. But this backfield is far more of a committee than anyone could’ve expected, which really caps his ultimate ceiling.

23. Dwayne Washington (DET) @ CHI – A very fair bet for a TD against the hapless Bears, Washington also comes with blow up potential if the Lions go up big and want to grind out the clock.

27. Terrance West (BAL) vs. OAK – Maybe the changes head coach Jim Harbaugh hinted at involved getting an extended look at West. At minimum, he’s the best bet for a TD out of this backfield.

UPDATE – West has been confirmed as the starter, making him a necessary speculative add in case he explodes and/or a viable desperation start if you’re in a pinch. The Oakland D is pathetic, and the team seems to have seen all they need out of Forsett. If they ride West and he produces, you could be holding on to a sturdy RB2 in Trestman’s friendly scheme.

28. Tevin Coleman (ATL) vs. CAR – As a solid weekly bet for at least one TD, I’ll usually have Coleman higher. Against a tough Carolina defense and with a slightly hampered QB, I’m not sure he gets into the end zone this week, and Freeman flashed more receiving upside against the Saints.

29.Cameron Artis-Payne (CAR) @ ATL  – CAP is guaranteed about 15 touches against the third most generous team against the run, but a TD still is highly unlikely with Cam Newton at QB.

30. Giovani Bernard (CIN) vs. MIA – Certainly has some blow-up appeal if game flow favors him, but I feel Cincy will get up big and pound the rock all day long with Hill.

31. Jerick McKinnon (MIN) vs. NYG – I haven’t been sipping the McKinnon Kool-Aid at all, and I don’t plan to start, against a NYG defense that yields the 30th most points to RBs this year. Their efforts to beef up the front seven has clearly worked.

34. Derrick Henry (TEN) @ HOU – Even as DeMarco’s clear second fiddle, Henry can’t be kept out of the end zone for much longer. He’s too much of a beast.

37. Dexter McCluster (SD) vs. NO – McCluster may have the highest ceiling out of any of these options.

38. Rashad Jennings (NYG) @ MIN – Given how close he seemed to playing last week, Jennings should suit up Monday night. The matchup is very  difficult, and this backfield has the looks of a nightmare for fantasy owners.

Update – Jennings has been named a “game-day” decision, making him now impossible to start given the Monday Night time slot and horrible matchup anyways.

39. Justin Forsett (BAL) vs. OAK – That being said, Forsett is the safer floor play with more guaranteed work. Despite his early season struggles, Forsett could do some damage against this bottom-10 run defense.

40. Kenyan Drake (MIA) @ CIN – The starter in name, Drake’s still stuck in a four-headed nightmare. He’s only named here for his guaranteed 8-10 touches.

42. Jay Ajayi (MIA) @ CIN – Like Terrance West to Justin Forsett, without the guaranteed work. Maybe he’ll plod in for a TD, but will likely be worthless otherwise.

44. CJ Prosise (SEA) @ NYJ – He’s been practicing in full, and might haul in a few cheap balls against the Jets