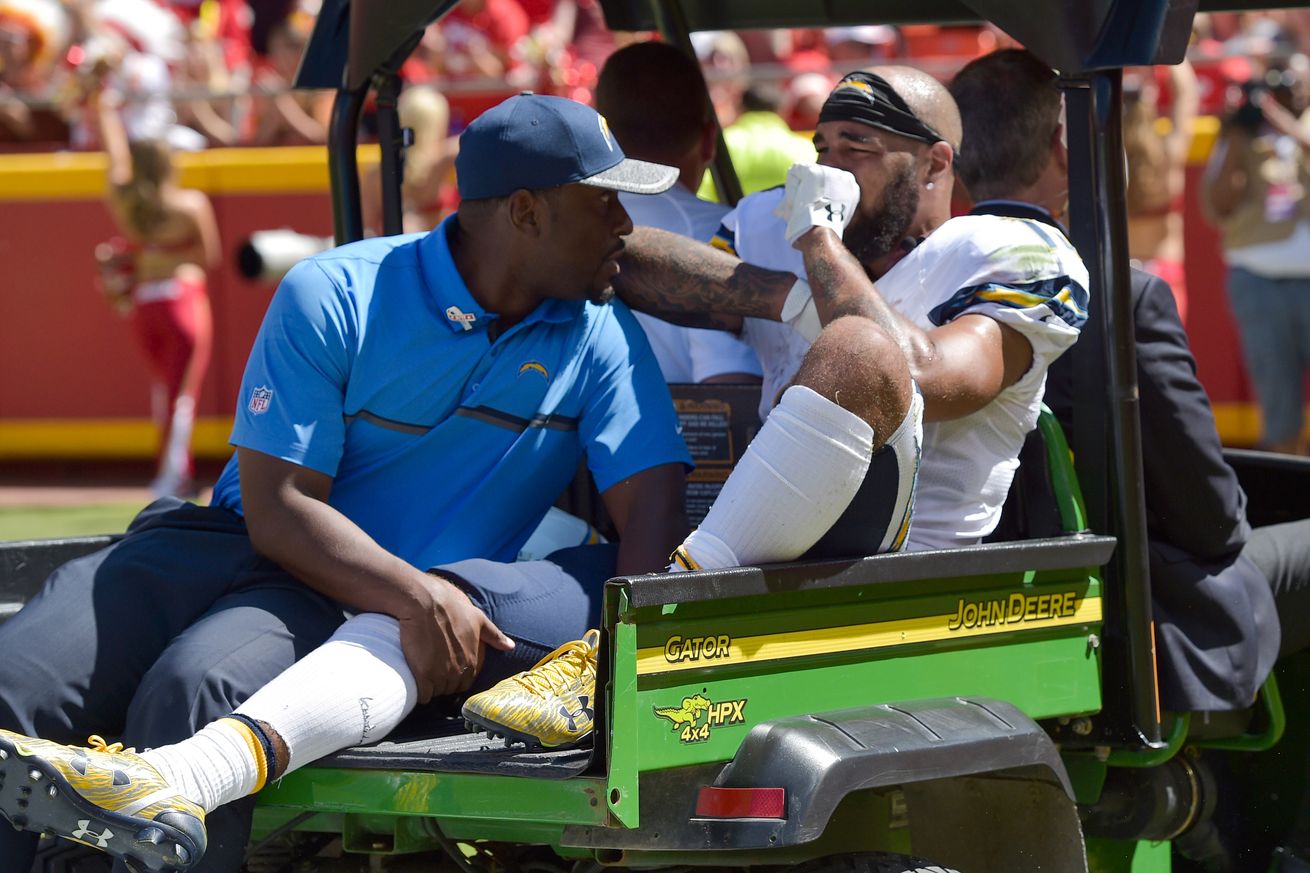 The Wolf guides us on where to start when hitting the waiver wire after key NFL Week 1 injuries.

With numerous games featuring fast & furious action down to the final drives, NFL Week 1 was simply incredible. Needless to say, such an amazing stretch of football creates an even more ruthless Monday Morning football-hangover; tragically, no one’s heads are ringing worse than Keenan Allen owners. As a fan of his game and work ethic, you truly have to feel for the guy and hate to see him robbed of another season far too early.  I luckily avoided him, more because of draft position than anything, but I can only imagine the devastation.

Yes, finding reasons to carry on is likely quite difficult in this dark ACL tearing hour, but that’s why we’re here with some of the best waiver advice in the business.  Shake off the dust, take “Mad World” off of repeat, and start hitting the waiver wire. While it’s doubtful a talent of Allen’s elite caliber is sitting out there, crazier things have happened. At minimum, here are some bandaids and ice packs to ease the pain.

Note – ownership %s based on Yahoo leagues (if you’re on ESPN, grow up). All of the below are available in over half of leagues, making them well-worth your attention. Also – if you have any questions i.e. “Should I drop X for Y?” hit us up on Twitter  @rotostreetj

Week One’s Top Options are wide receiver heavy, which can provide at least a mild form of comfort to Allen owners… a sloppy hooker hand job amidst a divorce if you will.

If you’ve been reading us and Tajae Sharpe is sitting on your waiver wire, you deserve the GoT Shame Bell Lady strolling behind you. Hurry up and place your bid before you let a second chance pass by (punishable by Mountain torture chamber).

By the end of the preseason, Sharpe was clearly Mariota’s most trusted target and the #1 guy in Tennessee. As expected, he led the team in targets (11), catches (7), and yards (76), and snaps (64, as compared to the next closest Harry Douglas’ 37). No, the final line isn’t cream-worthy, but it’s also a pretty solid representation of his iron floor. Marcus Mariota loves Sharpe’s versatility and dependability, raving: “He makes it easy…He is a very versatile athlete, and he’s done a lot for us already. He creates separation in and out of his routes and we are going to continue to expect these kinds of things out of him.”

With this type of role and the full trust of his QB, some much larger days are in Sharpe’s future. If you have a WR3 or flex gap you want to fill with some sure weekly production + an underrated ceiling, Sharpe should be your #1 waiver target this week.  He’s a fair bet at WR2 production, and has a real chance to be 2016’s top scoring rookie WR.

Here’s one I completely whiffed on.

Historically, Kyle Shanahan’s offenses have funneled the passing work to the X-receivers and rarely facilitated consistent production for the #2 option. Thus, I chose to ignore Mohamed Sanu despite some very solid preseason flashes. This was dead wrong, as he clearly deserved more love as a late round upside target. Sanu was given multiple chances to make plays in an every-down, locked-in role, and he succeeded to the tune of 5 catches, 80 yards, and a TD.

Now, I don’t see a much higher ceiling for Sanu whenever Julio Jones shares the field. Yet, his role as Jones handcuff could be wear the true value lies…  if Jones were to go down (he’s already dealing with some sort of ankle ailment), Sanu would provide a solid plug-in replacement. In 2014 when stud AJ Green missed time, Sanu averaged 18.75 games as the WR1.

So some WR3 standalone appeal in the right match-up, with WR1 upside bench stash and/or insurance for Julio investors… seems like a great option to add.

If you’ve listened to the Podcast, read any of the preseason Big Boards, or tuned into our Sunday Facebook Live show, you know I’ve been singing Wallace’s praises for a while. The logic is simple: OC Marc Trestman calls among the most pass heavy game plans in the league, which historically have facilitated massive seasons for his WR1s (Steve Smith was #8 in WR PPG last season). Entering the season, early buzz suggested Wallace and the strong-armed Flacco were establishing strong deep ball chemistry, and that the former Steeler/Dolphin/Viking was indeed looking like the top target. If he still had the deep speed and was merely a poor fit (as I expected), Wallace could have a monstrous year.

Well, consider Wallace’s speed confirmed, courtesy of a beautiful 66 yard TD catch in which he roasted the secondary. On the surface, Wallace seems a classic boom-bust guy; a poor man’s  DeSean Jackson. Yet, if he is the true #1, there’ll be enough aerial volume for a decent (and often ignored) weekly floor. Steve Smith Sr. could emerge as the guy at any point, which makes Wallace a risk, but out of all the options here Wallace might have the sneaky highest ceiling.

This guy has been setting the NFL ablaze with his 4.32 speed all preseason, ultimtely hauling in 8 catches for 144 yards and two TDs over a few quarters; now, we’re seeing it translate when it matters, as Will Fuller logged a huge 5 catch, 107 yard, TD debut. Yes, the day should’ve been even more massive, as Fuller dropped an 83 yard TD bomb (a consistent knock on his game). Indeed, it was against a dumpster fire secondary. But let’s call a spade a spade: the guy was open all over the field, and led the team with 11 targets.

New QB Brock Osweiler has been singing Fuller’s praises all off-season, noting at the end of training camp: “Obviously, everybody knows about his speed — they saw him all last season, they saw him at the combine — but it’s his work ethic…That’s what really makes him special. He comes in every single day, he works extremely hard, studies hard and practices hard. We expect big things out of Will this season.” Just a pure, football rat. We love it. Clearly, this drive has earned him a prominent role — once again, he outpaced Hopkins with 11 targets. No, this won’t be the norm, but the team is clearly unafraid to chuck to him.

Simply put, there’s far lower ceilings you can burn a bench spot with. If he’s lingering, you can find something to cut.

One of my  first articles of all time was titled “Under-the-radar Sleeper #1: Phillip Dorsett.”  Simply put, almost all the positives emphasized in that article– from surrounding talent, to his own fit with Luck’s deep ball — were on display, as Dorsett led the team in yardage (94 yds) on just four catches. This offense projects to be a well-oiled machine, and Dorsett should feast on single coverage all season.

But I didn’t lose Keenan Allen and already have solid WR options… Who should I check for @ RB?

Great question. Detriot RB Theo Riddick (34% owned) and/or Atlanta RB Tevin Coleman (42% owned) both make for some upside RB acquisitions plays.  As a surer bet for weekly points thanks to higher usage, Riddick is the option if you need some RB production immediately or lack any quality depth behind your starters. The sizable three-year, $12.75 million deal Riddick inked suggested a high standing / important role with the team; the subsequent 12 touches (7 carries, 5 catches) confirmed this truth. We almost assuredly have seen Riddick’s highest 2016 output, but some safe volume is on the way.

This has the looks of a true 50/50 split, and Coleman was shockingly more involved and impressive in the passing game (work which was initially thought to be all Freeman’s).  The second-year speedster tallied 95 yards on five catches, and could warrant flex consideration if he continues this extended passing game role. In addition to some very fair standalone appeal, Coleman would have RB1 upside if Freeman were to go down.

Also, be sure to do a quick sweep to make sure James White (47% owned) isn’t lingering. While he was lightly used this Sunday, he looked plenty explosive. White figures to have some much bigger days in the near future, perhaps as soon as Week 2 against a Miami team that gave up the most PPR points to backs in 2015.

I don’t play in any joke leagues… all those guys are taken. Is there any hope for Keenan help?

Here are some quick hits on lightly owned WR options that belong on rosters in the right situation:

Eric Ebron (35% owned) is a guy who might be far more than just a fill in. He made some impressive leaping grabs and caught all 5 of his targets for 46 yards and a TD. This offense was moving the ball at will, obviously against a horrendous D, but Jim Bob Cooter’s attack lives on. Ebron should have a fair weekly shot at a TD, with at least 3-4 weekly receptions to boot.

If he’s scooped up and you’re desperate for a rental, give Vikings TE Kyle Rudolph (18% owned) a gander. He matches up with a Green Bay defense that was shredded by Julius Thomas in Week 1, and Rudolph himself recorded a pedestrian but serviceable four catches for 65 yards last week.

Check back Wednesday night for The Wolf’s preliminary Week 2 rankings, as well as some trade advice from The Great White Shark.