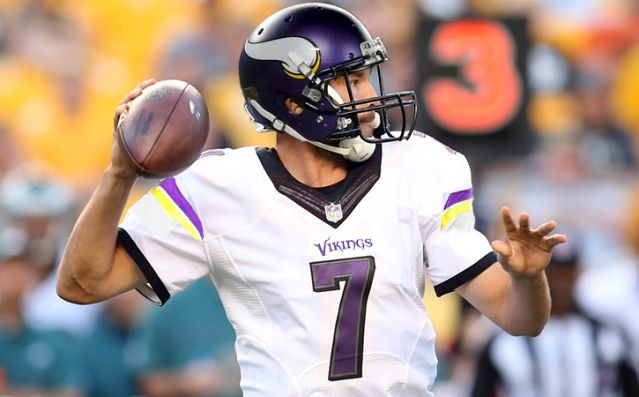 Saturday was cut-down day in the NFL, where teams had to trim their rosters from 75 to 53 players. The majority of these cuts were not relevant to fantasy football, but there were a couple of surprises.

First, we got a bombshell early Saturday by the way of a trade:

This seems like a pretty steep price for Sam Bradford — essentially a one-year rental — while Teddy Bridgewater recovers from his knee injury. Although it looks like Shaun Hill will start Week 1, Bradford is expected to start Week 2. This trade should save Stefon Diggs‘ fantasy season and allow Adrian Peterson to get some breathing room from opposing defenses. It’s a questionable trade from a pure football standpoint; however, it’s a potential fantasy saving trade for Peterson and Diggs.

From an Eagles standpoint… Uhh, they want Carson Wentz to start once he is deemed healthy. The fantasy ceiling of that team dropped like an anvil. Wentz had little experience as a starting quarterback while playing for FCS powerhouse North Dakota, but has the size and measurables to eventually (probably not) be good. Darren Sproles, Ryan Matthews and Jordan Matthews are the only draftable Eagles right now.

Then we got our surprise cut of the day:

One member of the terrible four-back committee got axed and it was a pretty big surprise. The word around Ravens’ camp was continuously optimistic regarding Justin Forsett and his recovery, but it looks like it was a giant puff-piece. Right now, Terrance West is the man to grab out of the Ravens backfield. He has had a very strong preseason and should get early-down and red-zone carries. Buck Allen will be the guy to own in PPR leagues and should be a consistent check-down back for Joe Flacco. Once he recovers from a MCL injury, Kenneth Dixon will eventually be dynamic out of the backfield as a pass-catcher. West has never been a reliable full-time guy, so expect Allen to see some ample time and Dixon to see the field, when healthy.

Keep an eye out this week though, because word around Baltimore suggests that Forsett could be back in town after they lower his cap hit. If that does happen, fantasy owners will want to gauge their eyes out after they drafted West or Allen earlier than they wanted to.

Here’s some other news that dropped while you watched 18 straight hours of college football:

Chip: Carlos Hyde is still in the concussion protocol. #49ers