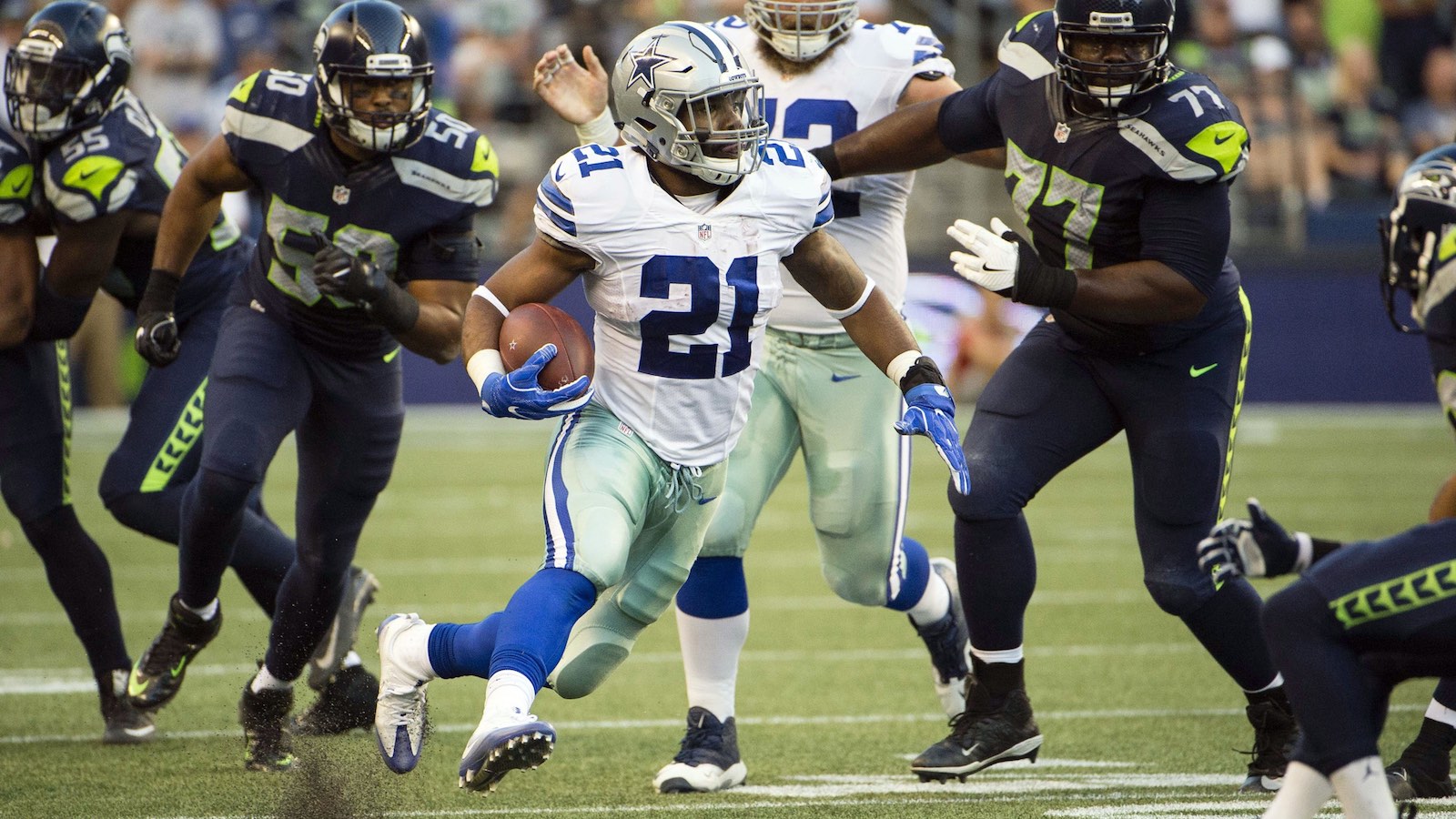 It was only a preseason game, but Ezekiel Elliott proved to Dallas Cowboys fans that he was worthy of the No. 4 overall pick, rushing against the most respected defense in the league. Elliott finished with 48 yards on seven carries, and came to blows numerous times with one of the league’s hardest hitting safeties, Kam Chancellor.

“They thought they had to welcome me in because I’m a rookie, so they were giving me all that rookie talk,” Elliott said, “but I had to let them know I belong here.” Zeke only played 15 plays on the night, but boy did he show he belonged there.

First, he showed his elite pass blocking abilities right away on a blitzing K.J. Wright (#50), which will allow him to be trusted on all three downs:

Tony Romo appeared to hurt his back. Great block by Zeke, but certainly not what the Cowboys want to see pic.twitter.com/21rt9cUjp2

After the running back showed off his talents as a blocker, he then decided to take on Chancellor, who was surprised by Elliott’s physicality and willingness to take on contact.

“I was, because there was no film on him,” Chancellor said, via the Seattle Times. “I didn’t know if he was going to juke me or not, so I was a little surprised. But not the second time. Second time you know I’m bringing that wood. I was a little surprised the first time, but he has a lot of courage for that. I’ll give it to him. But if it was a full game, it would have been a bloodbath.”

If you happened to watch Elliott play at Ohio State, you would know that he excelled running the outside zone play. His patience shows when he extends the play, then once he uses his elite vision to find the slightest crease, he plants his outside foot in the ground and explodes through the hole into the second level. Elliott will not be able to break as many long touchdown runs as he did in college, so instead he will try to run over the defender in his way.

This was the first time he met Mr. Chancellor: 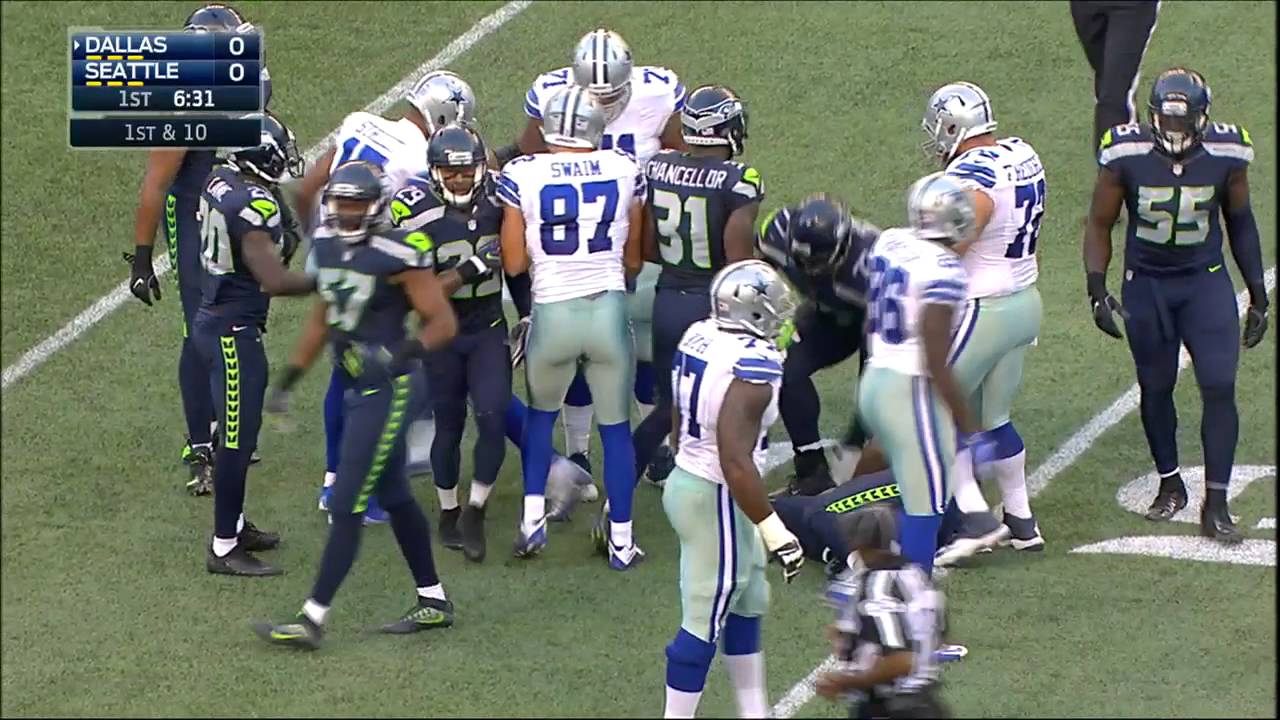 After clearly pissing off the big safety, Chancellor was called for a 15-yard late hit penalty (Welcome to the NFL moment), when he decked the running back on an incomplete pass after the whistle.

What’s best is that Elliott did not back down, in fact he decided to go back at the member of the “Legion of Boom” again:

Haven't seen many backs do this to Kam…did it 2X in his first 8 plays pic.twitter.com/ufOnSbvQgw

All in all, Elliott only played two full series in his first game as a Cowboy, but he made his mark against the NFL’s baddest and meanest defense.

What makes the former Buckeye so appealing for fantasy owners are his multiple elite attributes, which will allow him to be a true, three-down back, and it doesn’t hurt that he’s running behind that offensive line. The Cowboys offensive line did an excellent job on Thursday night and they showed why they are known as the best in the league.

“It makes my job really easy when I play behind that great offensive line. I can only think of one run where someone tackled me when I wasn’t in the second level,” Elliott said. “When you’re running on safeties all day it makes your job real easy.”

The only negative on the night for the Cowboys was Tony Romo‘s back injury, which actually could help Elliott, as weird as that sounds. Rookie QB Dak Prescott came into the game and the two rookies shined together. If Romo’s injury is serious or if he does not last all 16 games (he won’t), Prescott’s dual-threat ability will only open up more lanes for Elliott. The Cowboys can run more plays out of the shotgun, which is what the tailback ran 100-percent of his plays out of at Ohio State and they can run the zone read with Dak and Zeke. Sure, Dez Bryant and Jason Witten‘s stock would slip a little, but Prescott has been unbelievable in the preseason and the running game would improve as a whole. This is the first time in a long time that the Cowboys would be in an okay place if Romo were to go down.

If last night was a foreshadow of Ezekiel Elliott’s 2016 season, it would be a major, major mistake to let him fall out of the first round of your fantasy draft. In fact, your league loses all of its credibility if he lasts until the second round.