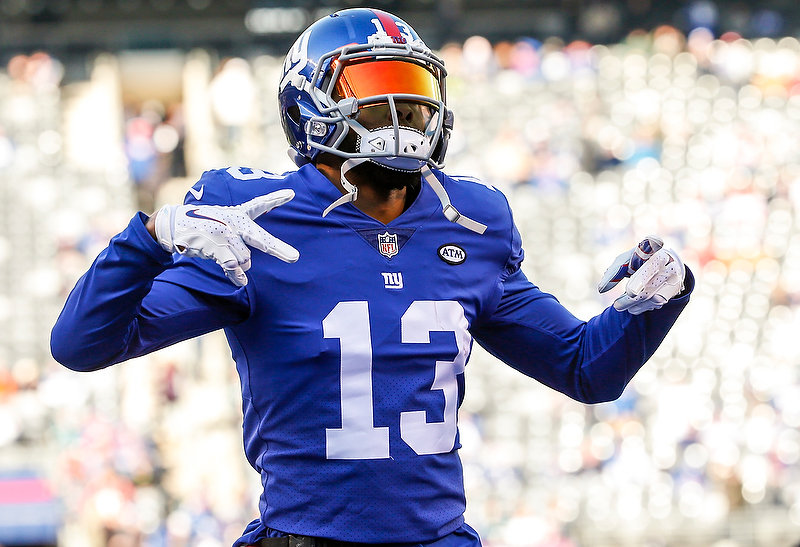 Training camps are in full swing, and we finally have game action. After breaking down the preseason Week 1 film and reviewing all the latest news, here’s my latest PPR WR rankings heading into Week 2 of preseason action.

12. ⬆️? Demaryius Thomas (Denver Broncos) – Sanchez’s solid showing in preseason Week 1 has eased my worries quite a bit. Thomas was my #2 WR last year because Kubiak’s offense historically funnel looks to the X Receiver (Rod Smith and Andre Johnson)… Hell, Demaryius himself was fourth in the league with 177 targets last year, he simply had a corpse slinging the rock. With a competent arm making these looks more productive, I expect the leader in WR fantasy points since 2012 to bounceback in a big way.
13.? Jarvis Landry (Miami Dolphins)
14. Sammy Watkins (Buffalo Bills)

15. ⬆️???Julian Edelman ?(New England Patriots) – He’s back and dominating practice as usual. He’ll be one of the most dependable sources of PPR points from Weeks 5 on, and could be just fine with Jimmy. Sure, his TD upside might be capped with Bennett’s addition, but with more room to roam and Brady in revenge mode, I think he’ll be unaffected or even see a boost in this department.

**Note – Ideally you draft three of these top 21 as starters, especially in PPR leagues. There’s a big drop off in either ceiling or dependability here.

25. ⬇️Kelvin Benjamin (Carolina Panthers) – The reports that Benjamin’s out of shape, combined with those on Funchess’ rise, have me much more nervous about his 2016 fantasy outlook. There’s still oodles of upside here, but the floor has become a whole lot lower.

28. ⬆️Marvin Jones (Detroit Lions) – Jones  looked damn good on his 4 catches and 65 yards in preseason Week 2, and this marked the second week in a row in which he made an acrobatic catch along the sidelines. His rapport with Stafford is clearly strong, and reports that he’s the #1 option are looking quite accurate so far.

After a big Preseason Week 1, a bunch of Rookie WRs explode into this tier.

30. ?Josh Gordon (Cleveland Browns) – RGIII looked damn good in preseason Week 2, and he would give Gordon by far the best deep ball thrower he’s ever played with, creating a very real WR1 ceiling when he returns in Week 5. However, reports that he’s out of shape + the emergence of WRs Terrell Pryor and Corey Coleman could cap this upside. I won’t take him until I have three or four quality options, but he’s as high upside of a bench stash as any player out there.

32. ↗️Michael Floyd (Arizona Cardinals) – Floyd rises in John Brown’s absence, as he’s provided the chance to become the clear #2 (or even #1) in this explosive aerial assault.

36. ⬆️?Sterling Shepard (New York Giants) – Preseason Week 1 showed us this guy was as pro ready as any prospect in recent years. He carries very real 1,000 yard and 8-9 TD upside in this explosive attack.

37. ⬆️? Corey Coleman (Cleveland Browns) Though we haven’t seen Coleman play yet, RGIII’s deep ball has me very excited about this offense’s upside.

39. ↘️John Brown (Arizona Cardinals) – These concussions should be a non-issue, but the missed time has me a little down on Brown.

40. ⬆️Devin Funchess (Carolina Panthers) – Nothing but positive praise has been heaped onto Funchess this offseason, with people close to the team prediciting he could outperform Kelvin Benjamin. I don’t buy this clearly, but also feel his production could be damn close. He’ll keep rising if these reports keep comin’.

42.↘️ Kevin White (Chicago Bears) – White’s imposing physical skills have been on display, but he’s apparently playing tentative and coming along slowly after missing the entire 2015 season due to injury.

43.? Emmanuel Sanders (Denver Broncos) – He’ll outperform plenty above him, but his ceiling just doesn’t excite me in the least.

45. ⬆️? Mike Wallace (Baltimore Ravens) – I loved the report that Flacco and Wallace are clicking for highlight plays on a daily basis. Wallace has always been at his best with a strong-armed signal caller, and neither Bridgewater nor Tannehill fit that bill. Flacco, however,throws one of the most frozen ropes in the league, and the two meshing has me giddy. OC Marc Trestman will call one of the pass-heaviest scripts every week and Wallace should have a few chances for monster plays on a weekly basis. Remember, Steve Smith was 8th in PPG in this scheme last year. Wallace is a poor man’s DeSean Jackson.

51. ↗️Steve Smith (Baltimore Ravens) – Smith was finally activated off the PUP, and instantly should be on fantasy radars. He was #8 in WR PPG, but this injury was terrifying given his age. He could fly up the board if he shows he still has it.

52. ⬇️Tavon Austin (LA Rams) – Those Goodell socks on Hard Knocks  really changed my opinion on Tavon as a human. Don’t think I could stomach drafting him now.

53. ⬆️Will Fuller (Houston Texans) Fuller becomes highly relevant  after ascending to the clear #2 WR in Houston and thriving in this role: 4 catches, 73 yards and a TD. He could have some week-winning performances in 2016.

54. ⬆️Bruce Ellington (San Francisco 49ers) – The positive drum continues to beat loudly, but I want to see some on-field translation before I go all in.

54. ↗️Markus Wheaton (Pittsburgh Steelers) – Wheaton gets a bump strictly because of Sammie Coates’ struggles. Mike Tomlinson and Big Ben will roll strictly with who they trust, and Wheaton will be that guy. The #2 guy in this explosive attack is always worth a look.

55. ⬆️ Terrelle Pryor (Cleveland Browns) – Why not? Pryor’s an athletic freak, and is showing good chemistry with RGIII so far. He also dusted Marcus Trufant, 2015’s least targeted CB, by a few strides. I’m a believer in the Browns in 2016.

56. Tajae Sharpe (WR56, Tennessee Titans) – Following Dorial Green-Bekcham’s trade and a strong 6 catch, 68 yard preseason Week 2, Sharpe appears locked into a starting gig and needs to be on fantasy radars. No, this run-heavy offense isn’t the most appealing place for WRs, but Sharpe has looked like Mariota’s go-to guy on pressured situations. A #1 WR is always exciting, epecially one who’s gotten as much positive press as Sharpe.

57. ⬆️Kenny Stills (Miami Dolphins) – After hauling in three catches for 71 yards and two TDs, Stills has to be on fantasy radars. He’s reportedly had a strong camp and is highly motivated to improve on his subpar 2015. His chemistry with Tannehill was very real, and Gase should maximize his deep ball skills.

58. ⬇️ Sammie Coates (Pittsburgh Steelers) – Coates’ preseason is making him look like an undeserved ball of hype, but I’ll wait until he plays with Big Ben before completely writing him off. There’s still upside.

59. Kendall Wright (Tennessee Titans) – Big chance to rise when he’s back on the field if he claims the #1 WR role in Tennessee.

60.↗️ Malcolm Mitchell (New England Patriots) – If he truly has a shot at starting for the Patriots, which his preseason play would warrant, Mitchell would instantly warrant consideration even if fifth on the target totem pole. He would be a good late round pick in dynasty formats with the uncertainty of Amendola’s future health.