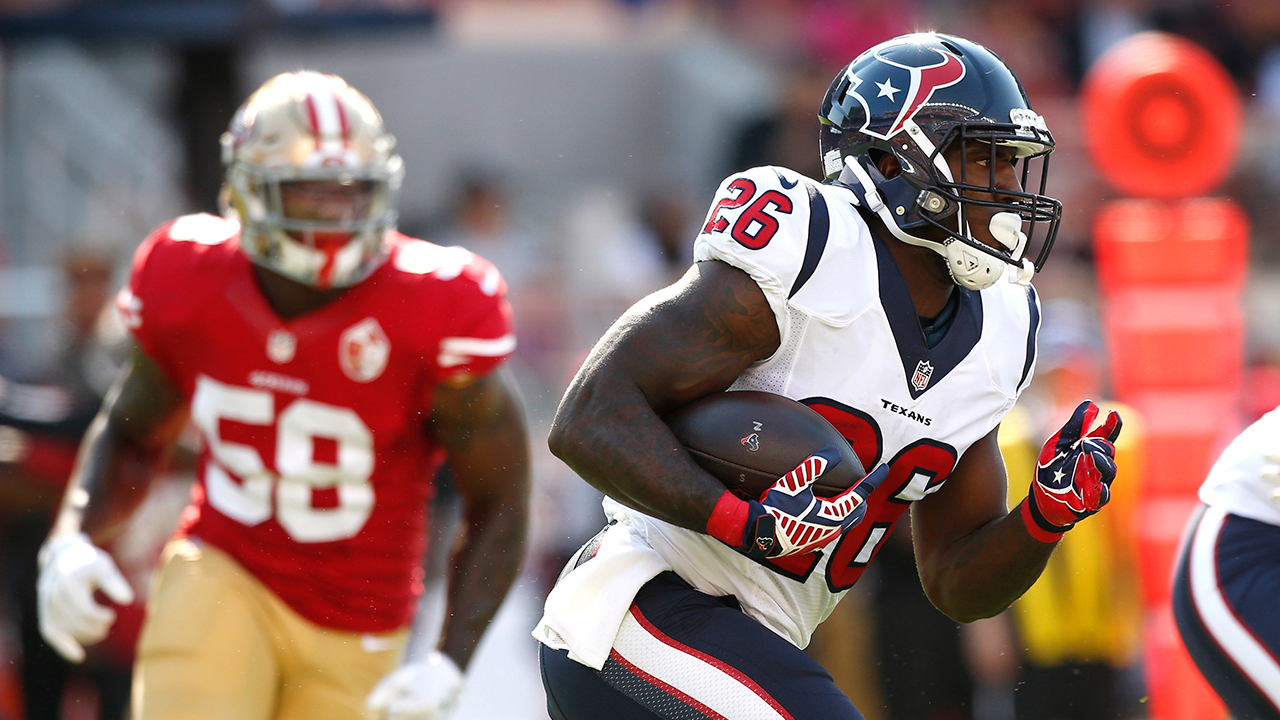 Training camps are in full swing, and we finally have game action. After breaking down the Preseason Week 1 film 1`and reviewing all the latest news, here’s my latest PPR RB rankings heading into Week 2 of Preseason Action.

3.↘️ Ezekiel Elliott (Dallas Cowboys) – The hamstring scare drops Elliott below the safer Todd Gurley, but if he shows it’s a non-issue in game action, he will vault right back alongside David Johnson in the top tier. He also stands to fall below Le’Veon Bell, and perhaps even AP, should the hamstring linger.

4. Lamar Miller (Houston Texans) – All this “season for the ages” talk has me so stiff.

10. Devonta Freeman (Atlanta Falcons) – They seem serious about involving Tevin Coleman, but his 4 carries for 42 yards and a TD might make him hard to bench.

15. ?↘️Thomas Rawls (Seattle Seahawks)
16. ⬆️ Jeremy Langford (Chicago Bears) – Operating as the clear lead back, Langford ripped off 55 yards on his five carries, including a nice cutback TD run. He has run exclusively as the #1 guy and stayed in during passing downs, making me believe he could be a true three-down monster amongst a dying breed. Langford should be shooting up the rankings.

20. ⬆️Jeremy Hill (Cincinnati Bengals) – After seeing the lack of options in Cincy, I feel like the Bengals are going to try real hard to establish the run behind their beastly offensive line and (hopefully) a recharged Hill. He looked like he had some juice in his 3 carries for 16 yards, including a powerful 9 yard TD. I owned Hill as a rookie and I know full well what he’s capable of, and I feel he joins Melvin Gordon as a great post-hype bounceback buy.
21. ?Carlos Hyde (San Francisco 49ers)
22. ⬆️Melvin Gordon (San Diego Chargers) – He showed more explosion & power on his 44-yard TD reception than we saw all of 2015. This has me jumping on the post-hype bounceback train immediately. Ken Whisenhunt has consistently emphasized how he wants to get the ground game going and Gordon appears to have the juice to do just that. He could continue flying up these rankings with more strong showings and instantly become one of my favorite targets at his low 7th, early 8th price tag.

24. Derrick Henry (Tennessee Titans) – OK, so I lead with the least startable guy of this entire tier, at least to begin 2016. Yet, at this stage of a draft I almost always have my RB2, and I want the guy who I think can change a season at some point. Henry’s ceiling truly rivals that of David Johnson and Jeremy Hill as a late-season RB1.

27.  ⬆️ James White New England Patriots) – White shoots up the Big Board in light of Dion Lewis’ second knee surgery. He’ll spend the majority of 2016 as the team’s primary third down back, which has always played a role (albeit unpredictable at times) in the Patriots offense. White’s looked strong in the preseason, and he scored double digit PPR points in five of eight games without Lewis, including three above 18 points. He’ll be a useful RB2 most weeks.

28. ↘️Matt Jones (Washington Redskins) – For a guy who will be dependent on volume, this AC Joint injury is highly discouraging to see. Jones still has upside with heavy volume in an explosive offense, but none of that matters if he can’t sustain the load. I’m very intrigued to figure out how work will be distributed in his absence.
29. ↗️?Isiah Crowell (Cleveland Browns)- I’m a buyer in the Browns offensive revival in 2016 and I think Crowell is a real threat for double-digit TDs with more red zone chances.

30. ?DeAngelo Williams (Pittsburgh Steelers) – A great investment for Dion Lewis or (obviously) Le’Veon Bell owners, or anyone uncomfortable with their RB2 who could use four weeks to figure it out. Would draft him higher than a few of these guys as a pure upside bench stash as well.

31. ?Frank Gore (Indianapolis Colts) – His rise has more to do with others around him falling, but he has reportedly been crushing camp and I was high on his TD upside last year. Why should I not be this year?

32. ?Jonathan Stewart (Carolina Panthers) – Nothing excites me about Stewart, other than the ability to get a fair floor for cheap. Cam’s goal line abilities really cap his ceiling.

33. ?Chris Ivory (Jacksonville Jaguars) – I love his TD upside in Jacksonville but I don’t love how he started behind Yeldon, or that Yeldon looked pretty solid with his carries.

34. ⬇️? Giovanni Bernard (Cincinatti Bengals) – Although I once thought Gio might be a sneaky bet to lead RBs in receptions, the latest reports suggest his role should remain unchanged.  He’ll outperform the RB30 spot for sure, but I see minimal ceiling here.

35.↗️ T.J Yeldon (Jacksonville Jaguars) – Yeldon is growing on me as a late round investment. He seems firmly entrenched as the starter, even though he’ll cede most of the six point chances to Ivory. He’ll have room to roam underneath with this aerial attack looking very solid. I was admittedly too low on Yeldon and underrated his ceiling.

36.↗️ Jay Ajayi (Miami Dolphins) – Ajayi has operated as the clear #1 guy, and he’d be ranked far higher if he had shown any competency in his carries. Unfortunately, he hasn’t, and this looks like a ripe fantasy set up that could rot away with  insufficient talent to capitalize on it.

37. ⬆️LeGarrette Blount (New England Patriots) – He seemed to have run away with the big back role in preseason Week 2, posting 69 yards on 11 carries (6.3 YPC). More importantly, after both Brandon Bolden and Tyler Gaffney failed to convert multiple goal line attempts, Blount pounded in his first chance in emphatic fashion. If he indeed has a stranglehold on the “goal line back” role, Blount will be a fair bet for a weekly TD. With Lewis coming along slowly, Legarette has more upside than he’s currently given credit for.

38. ↘️Justin Forsett (Baltimore Ravens) – The other backs all flashed in Forsett’s absence, which makes me nervous of a committee. He could receive a big bump with a solid showing.

41. ⬇️??Arian Foster (Miami Dolphins) – Before preseason Week Two action,  I wrote: “Cannot wait to see how Foster looks. He could rise or drop heavily depending on his performance.”

After a horrendous showing, Foster indeed fell hard…40 spots on the Big Board and 20 among the RBs. Well, his preseason debut could not have been a bigger nightmare. Foster was clearly behind Ajayi, and he was wholly unimpressive in his brief action, as he lacked any sign of explosion while struggling to get to the edge. Perhaps he was just shaking off the rust, and Foster does profile as a better fit for Gase’s system if he can find his form. Unfortunately, this seems unlikely, and Arian’s glaring talent + volume question marks make him impossible to trust as anything more than an used stash.

44. ⬆️ ?Christine Michael (Seattle Seahawks)- I loved what I saw in preaseson Week 1, and he followed this up with an impressive 10 carries for 55 yards in Week 2. Even more encouraging, Michael caught a pass while split out as a wideout, suggesting he has feature back upside. He continues to rapidly climb this list, and would shoot up even higher if Rawls’ recovery continues to chug along slowly. I have a feeling this guy will win some games for people in 2016.

46. ⬇️ Dion Lewis (New England Patriots) – We have our first true preseason casualty, with Lewis expected to miss at least eight to ten weeks after needing a second knee clean up. Lewis still belongs on fantasy rosters as a potential difference maker for your stretch run, and at this stage of the draft RBs are likely stashes anyways. Nonetheless, this is a terrible blow for the Patriots and anyone who’s already drafted. He could become undraftable ifhis recovery timeline changes again.s.

51. ⬆️Terrance West (Baltimore Ravens) -One of 2016’s preseason darlings, West didn’t disappoint in his Week 1 debut. He scored two TDs, and if this backfield wasn’t so congested, he’d be far higher.  This is a backfield I will continue to pay very close attention to.

54. ⬆️ Alfred Morris (Dallas Cowboys) – The Dallas line can clearly make anyone look solid, and Morris was hitting the gaping holes hard. If the former Redskin secures the #2 gig, he’d offer high-end RB2, perhaps even low-end RB1 value if Elliott were to miss time. You can do worse with a late round stab.

56. ↗️Spencer Ware (Kanas City Chiefs) – He was the starter and primary ball carrier during Week 1 of the preseason, which makes him Jamaal Charles #1 backup

58. ↘️Wendell Smallwood (Philadelphia Eagles) – He remains in prime position as a potential handcuff, behind a glass starter in a desirable spot…  but he can’t achieve handcuff status without touching the field