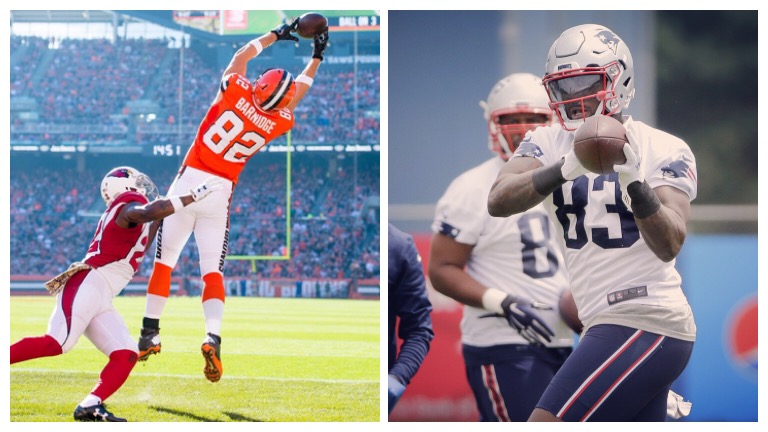 On that chase for the next big fantasy football breakout? Aren’t we all. Welcome to The Next _____ series, where we’ll profile 2015’s season-winning leapers, examine what factors led to the statistical explosion, and what players project for similar jumps in 2016.

Installment One: The Next Allen Robinson

Installment Two: The Next David Johnson

Installment Three: The Next Tyler Eifert

Tyler Eifert’s breakout profile: Though Eifert had the size (6’6″, 250 lbs) and athleticism (topped all combine drills in 2014) to be a terror at tight end, an elbow injury cost him his entire sophomore season and sent his breakout campaign into a screeching halt. Throughout 2015’s training camp, however, Eifert quickly regained form and flashed his upside once again, reportedly dominating defensive backs in drills and catching everything in sight. Despite the positive stories, injury concerns and overall skepticism kept Eifert’s price in the late 8th, early 9th rounds as the ninth tight end off the board.  When the entire Bengals offense took a step forward and frequented the red zone under creative play caller Hue Jackson, Eifert’s size and leaping ability were finally maximized: the Notre Dame product hauled in 13 scores in only 13 games and ascended to the truly elite TE group.

Part of what made Eifert so dangerous, especially in the red zone, was his dangerous mix of a massive frame with unnatural speed. In fact, in 2014 Eifert led the combine in all meaningful measurables. Barnidge, who also stands at an imposing 6’6″ but is slightly lighter at 235 lbs, bests Eifert in all categories but leaping ability…meaning Gary Barnidge would’ve ranked tied or atop five of seven 2014 Combine Categories.  Mind. Blown.

Yes, I too am wondering why this type of athleticism has rotted in a blocking role in Carolina and Cleveland for seven NFL seasons. Particularly when you see the types of plays the guy can make with his ridiculous hands and enormous catch radius. Just check out the tape from his NFL Top 100, where he was recognized by his peers among the best talents in the league:

The fades, outs, slants —  Barnidge executed them all, using that rebounding background and enormous frame to his advantage. Beyond just the red zone, Barnidge also terrorized the seams with his deep speed, often giving teams that “too-fast-for-a-linebacker, but too big for a safety” type of nightmare cover.

Is it not too perfect that 2016’s Eigth Round TE breakout will be facilitated through the same offensive system? Hue Jackson is a bright offensive mind who has long squeezed the most out of his talent and skill sets; given how similar Barnidge and Eifert are physically, we can expect Barnidge to be employed almost identically.  Not that Barnidge hurt for usage in 2015, as his 123 targets bested all but Delanie Walker among tight ends while his 23 red zone looks tied for second among all players, behind only Eric Decker’s 28. In fact, the volume itself is almost certain to regress.

What seems bound to improve, however, are the quality of Barnidge’s looks. In 2015, Eifert and fellow stud Delanie Walker tied for the league lead (including WRs) for success in the red zone, converting 80% of their 15 red zone targets into 12 catches; Eifert himself turned these into 106 yards and 11 TDs. Sure, a major part of this was Eifert’s sheer ability, but Hue Jackson’s offensive genius has to be given some serious credit.  In reviewing the tape, many of Barnidge’s 2015 red zone looks were last-second panic chucks into heavy coverage , which created abysmal efficiency ratings. With better play calling, as well as the addition of explosive rookie Corey Coleman and eventual return of Josh Gordon, Barnidge should find more room to roam and increase his efficiency tremendously; thus, even if the volume dips, Barnidge should be considered a safe bet to match or improve his 9 TDs from last season.

Calling Barnidge a breakout hardly seems fair after he literally came out of nowhere in 2015 for 79 catches, 1043 yards, and 9 TDs. Yet, going at pick #93 overall in FantasyPros composite ADP, the fantasy community clearly does not believe. When a player blocks for 7 years and then explodes for Pro Bowl stats, skepticism is fair.

The tape, however, shows Barnidge is no fluke. Yes, some reception and yardage regression are definitely possible as Barnidge slides from option #1 to #3 on the target totem pole. Yet, with improved play calling under Hue Jackson and more surrounding weapons, this offense should take a step forward. Thus, Barnidge should see higher quality targets, particularly those in the red zone where his impressive catch radius and uncoverable size are most effective. The decrease in quantity will be minimized by the increase in quality, and Barnidge’s numbers should look highly similar, or even slightly better, than his monstrous 2015.

While I clearly love Barnidge, New England’s monstrous new weapon is my favorite fantasy tight end to target because of a similar, perhaps even higher, ceiling but a price 60 picks cheaper (TE14, 147 overall).  Covered in greater length here, Bennett is indeed using his 6’6″, 275 lb frame to dominate in the red zone. Yet, even more encouragingly, Bennett is terrorizing safeties all over the field — local papers report Bennett racking up targets and receptions throughout Two Minute drills, while Brady and Garoppolo spend time every practice working off to the side with Gronk and Bennett to build chemistry on the entire route tree.

Behind a revenge driven Brady, the Patriots’ offense should be among the highest scoring juggernauts in the league and the massive Bennett should make a major dent in those numbers. He’s going to feast against single coverage / the defense’s third options amidst such an explosive surrounding cast, which will be particularly threatening in the Red Zone. No one can place a ball better than Tom Our Savior, and Bennett will come down with plenty of perfectly thrown balls even if defenders are near. New England could easily boast two top-five fantasy tight ends in 2016 with these Towers of Terror, and Bennett has a real shot at 12 TDs. That this type of upside is available beyond Round 12 is criminal.

Other names to consider

Thomas gets the slight nod, as he’s finally at full health and was reportedly “unstoppable” at OTAs. Ladarius Green, meanwhile, has the more talented quarterback and an easier path to targets, but hasn’t been able to get onto the field at camp and remains a lesser-established product. Nonetheless, both carry double digit TD upside in Round 9 and beyond, making them worthy contenders in The Next Tyler Eifert contest.