Fantasy Breakouts 2016: The Next David Johnson 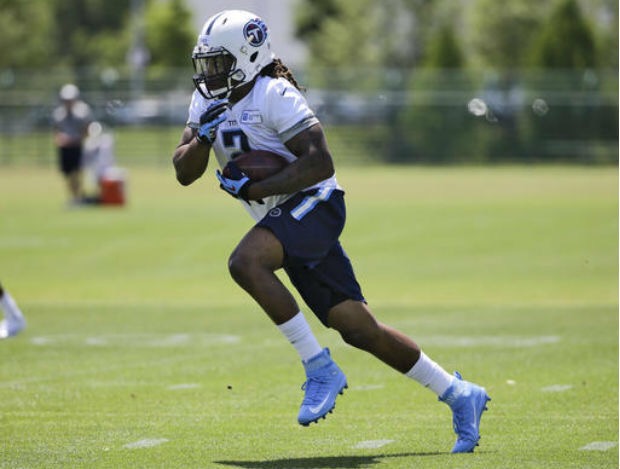 On that chase for the next big fantasy football breakout? Aren’t we all. Welcome to The Next _____ series, where we’ll profile 2015’s season-winning leapers, examine what factors led to the statistical explosion, and what players project for similar jumps in 2016.

Installment Two: The Next David Johnson

David Johnson’s breakout profile: Originally buried behind both Andre Ellington and Chris Johnson, David Johnson became a double-digit round afterthought by drafters despite his off-the-chart athleticism and high-end versatility. Anyone watching him score TDs on his first two NFL touches — a reception to end a game and a kickoff return to begin the next one — saw a special talent, and ideally stashed or bought low on him. Once injury allowed him to leapfrog the less talented Chris Johnson, David’s amazing skill set proved a glove-like fit for Arians scheme. Patient owners who waited on the glaring talent were rewarded with elite RB1 numbers for their stretch runs (ala Jeremy Hill in 2014).

Now, these two are obviously completely different backs. David Johnson is the dangerously versatile, size / speed dynamo, whereas Derrick Henry is the massive runaway freight train.  Yet the backs have three crucial parallels:

We’ve already written at length about Derrick Henry’s freakish measurables and steam rolling Alabama tape. As a reminder, this guy has the size, speed, and explosion of Von Miller, the reigning Super Bowl MVP. The greatest knock on Henry has been his limitations as both a receiver and as a strict North / South rulnner; in his brief pro tenure Henry has been laying those labels to rest, flashing in camp as a route runner with solid hands and impressing with his cut back ability when the initial hole hasn’t emerged (all while of course maintaining his steamroller status). Some fantasy porn:

From The Tennessean earlier today: “Rookie running back Derrick Henry tossed nose tackle Al Woods while breaking into the secondary on run. The Heisman winner from Alabama has size, speed, strength and has shown surpringly excellent pass-catching ability. A short time later, DeMarco Murray, wide open, dropped a Marcus Mariota swing pass in the flat. Even if Murray is considered the team’s “workhorse,” Henry should earn plenty of playing time this season.”

The Tennessean the day before: “The book on Henry coming out of college is that he was primarily a North-South runner, which makes sense given that the Heisman Trophy winner is 6-foot-3, 247 pounds.

But when Henry couldn’t find holes in front of him Monday, he made successful cutbacks on at least a couple of occasions. The big man showed some lateral agility in eluding defenders and taking the ball back toward the middle of the field.

Mularkey said he “saw some things” from Henry: “I saw some vision on some of the runs that we had. There were some holes in there that looked slim, and they are at this level. He hit them pretty good.”

From todayspigskin.com after OTAs: “Henry was praised by head coach Mike Mularkey back in June for his ability in the passing game. Mularkey called Henry’s route running “impressive” and said Henry, all 6-foot-3, 243 pounds of him, was beating coverage players in the open field.

“I am not sure why they did or didn’t do it [at Alabama],” said Mularkey. “They were pretty happy with just handing it to him to get the production. But he certainly has some good hands.”

Just like the versatile David Johnson fit like a glove in Brucs Arians’ creative aerial scheme, Derrick Henry is tailor made for what head coach Mike Mularkey calls an “exotic smashmouth system.” I think I’ve mentioned once or 300 times that Henry is 6’3″ and 247 lbs of Von Miller type of athleticism, right? Is there anyone better built to exotically smash a mouth than this absolute battering ram? Plus, with his newly discovered pass catching prowess, Henry could get real exotic.

Before Henry was drafted this Bleacher Report post did an excellent job profiling the massive back and the ideal scheme fit for his strengths. Mularkey’s run-centric, power based scheme seems like the exact offense this article describes. Mularkey’s most successful offenses have featured a true bull being fed, ala Jerome Bettis or Michael Turner; Henry offers more upside than either of those backs. Why would Mularkey hand pick the Alabama powerhouse and burn a valuable second round selection with Murray already rostered if he didn’t see something special? Once the opportunity is presented, Henry is going to feast.

Similar to Johnson last season, Henry enters 2016 firmly behind newly acquired DeMarco Murray.  Also similar, Henry offers far more raw ability at this stage of his career than the veteran back ahead of him (sorry, I’m not a believer in the DeMarco bounceback campaign). This has allowed his draft day cost to plummet into double digit territory, just like D.Johnson last year.

Unlike the Cardinals’ back, who began the year behind Ellington and CJ2K, Henry only has one back ahead of him. Even better, DeMarco is a major risk to falter and unimpress after a horrendous showing in Philly last season; sure, maybe the scheme wasn’t ideal, but I feel the absurd work in Dallas caught up to him and we’ll never see that level of play out of Murray again. Even if we assume the best and Murray returns to form, don’t forget he’s historically one of the most injury prone backs in the league, missing time in all but his incredible 2014 campaign

Whether injury or lackluster performance from Murray, the door will open at some point. Henry is going to explode through and tear the house down as soon as it does.

My love for Derrick Henry has been no secret, and dates back all the way to the NFL Combine. Even after Henry landed in an initially unappealing spot after the draft, I still was screaming about his value. If he begins dominating preseason games and a hype train sends his ADP soaring, just know I’ve been here all along.

But the parallels between Henry and past RB breakouts like David Johnson and Jeremy Hill appear almost too clear: a freak of nature enters an offense tailor made to his skill sets and is highly likely to see a significant opportunity, whether through injury or ineffectiveness above him. As soon as my starters are filled out, Henry will be the first back I target for my bench. Sure, you’ll have to wait some time, but once Henry’s starting and steam rolling, you’ll be laughing your way to a title with RB1 numbers.

Other candidates for The Next David Johnson

Charles Sims (Tampa Bay Buccaneers): Sims has already shown very well in the change of pace, third down role, as the dangerous size / speed combo totaled over 1,000 yards and finished as the 17th best PPR back in 2015. If Doug Martin falters or is injured, however, Sims would explode as the every down back in Koetter’s RB friendly scheme (his last true featured back was MJD in Jacksonville).

Tevin Coleman (Atlanta Falcons): Similar to Sims, Coleman is a stash that could offer some stand alone value with the coaches promising for some greater involvement to maximize the sophomore’s long speed. Yet, if Freeman were to go down, Coleman would project as an immediate RB1 in Kyle Shanahan’s always effective zone blocking scheme.

Wendell Smallwood & Darren Sprole (Philadelphia Eagles): Ryan Mathews is made of glass, so it’s truly a matter of when and not if he gets hurt. Once the door opens, a Philadelphia back will be entering Doug Pederson’s fantastic scheme that yielded RB1 numbers from handcuffs Charcandrick West and Spencer Ware in Kansas City last season. Sproles has been soaking up the lead back snaps with both Mathews and Smallwood shelved for the first week of camp, and has some poor man JaCha to his game. Until the depth chart shakes out. Bit, both backs are well worth a bench spot.

Josh Ferguson (Indianapolis Colts): Gore can keep denying Father Time for only so long, as 33 is the equivalent of 99 in RB years. Ferguson has flashed throughout OTAs and training camp, and would offer some serious upside as a high usage piece in a very explosive offense.