Is Jimmy Garoppolo worth a late round flier? 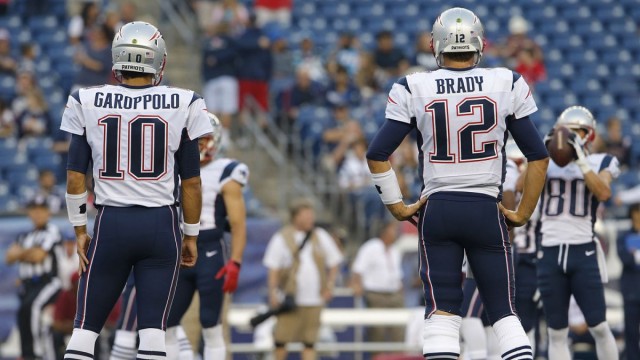 For the first time since 2008, there will be someone else under center, besides No. 12, in New England. With the news breaking of Tom Brady’s four game suspension being upheld, former second round pick Jimmy Garoppolo will have his number called for the first time in his NFL career as a starter.

Make no mistake about it; without Brady on the field, there will be a drop off in leadership and overall control of the offense, but will Garoppolo be a viable fantasy option in those four games? Vegas has already told us that Brady is worth an extra 6 to 7 points per game depending on the opponent, so what will the fantasy gap be between Brady and his heir?

The Patriots are loaded with weapons and Garoppolo is coming into one of the best offensive situations in the NFL.

The Eastern Illinois product will have a variety of security blankets who are able to create separation and make the quarterback’s job easier. Rob Gronkowski’s blend of size (6-foot-6, 265 lbs), athleticism and hands, make him an easy third down and red zone target. Julian Edelman and Danny Amendola are two of the better route runners in the league and both possess the most reliable and consistent hands that any quarterback could ask for. Not to mention the two additions; wide receiver Chris Hogan and tight end Martellus Bennett, who will also create major match-up problems for opposing defenses.

Dion Lewis should be available coming off of ACL surgery and he consistently makes something out of nothing. Lewis can take a swing pass and take it 10-plus yards with ease. They do bring back LeGarrette Blount and Patriots’ fans should expect the team to take a running back with one of their first four draft picks to compete against Blount.

It could be worse.

The following three will be at Gillette Stadium, where the Patriots have been just about unbeatable. Depending on the other quarterback’s match-ups on your fantasy roster, Garoppolo could get a spot start in the next two games. First, they’ll welcome Miami into town, who will have a new head coach in Adam Gase. The Dolphins have struggled in New England and have not won there since 2008, against Matt Cassell. He could put up some points against the Dolphins, who lost Olivier Vernon and have Cameron Wake coming off of an Achilles tear. Although it is not great to start a quarterback on a short week, the Texans have also not had much luck at Gillette. If Garoppolo looked good in the first two games, one could roll the dice on Thursday Night Football against JJ Watt and Co.

Unlike the prior two games, it would be smart to avoid Rex Ryan and the Buffalo Bills. Even though Brady has had some recent success against Ryan, it would be expected to see the Ryan brothers throw the kitchen sink at Brady’s backup. Josh McDaniels will probably call a safe game to keep his quarterback upright and it would be beneficial to cut the signal caller off your roster to get ready for Brady’s return versus Cleveland.

If you decide to select Brady, take a late flier on Garoppolo, as he could give fantasy owners one or two solid games.