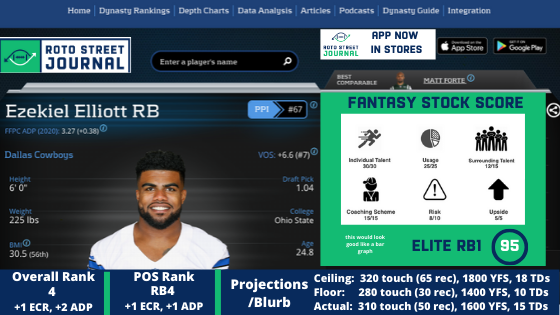 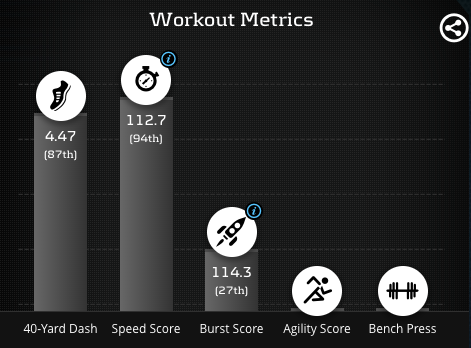 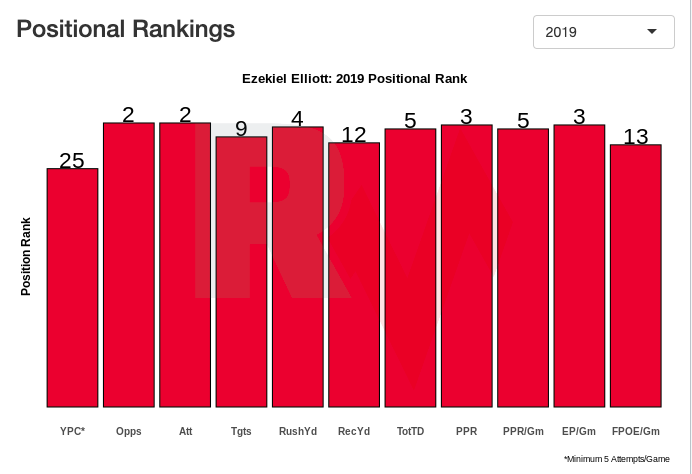 (Question) - Could something like this be "Toggled" with a Season Long (above) ranks AND Per Game / Per Touch Ranks to show efficiency?

Can the graph also show the stats -- whether embedded in the lines, or if they appear when hovered over, etc? 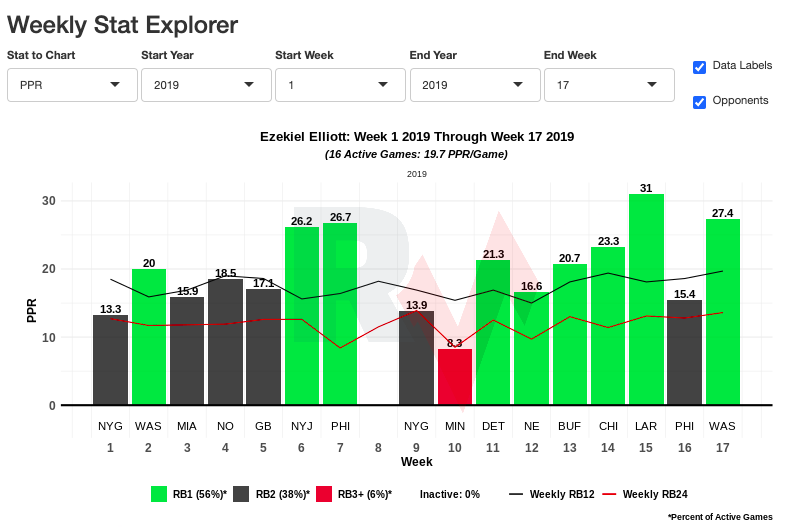 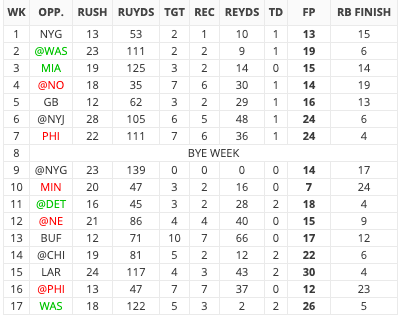 BAR GRAPH OF RANKS (LIKE ON TALENT) SHOWING WHERE THEY RANK IN: 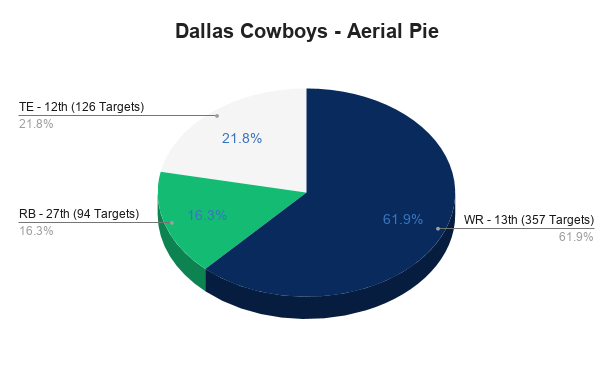 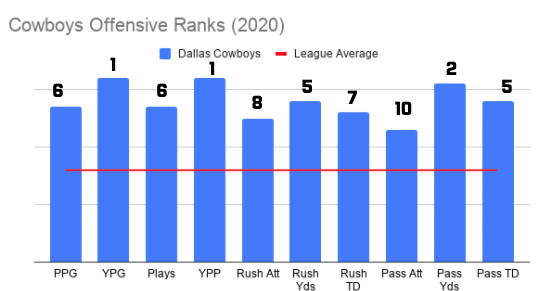 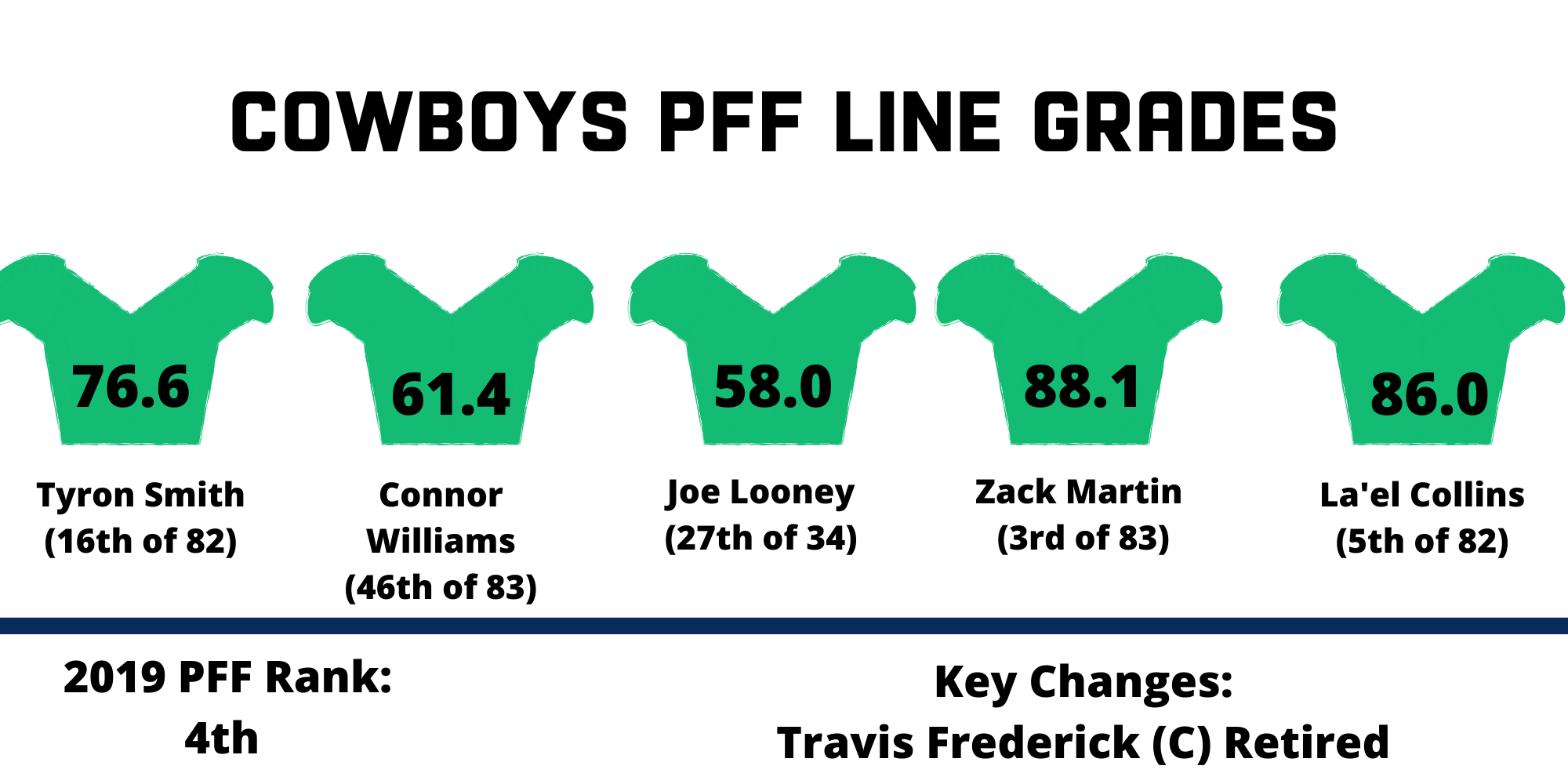 (Having the ranks + the stats would also be clutch -- as is the case with most of the stats in here. Stats (Rank)

(i.e. how much does the RB1 get used vs. RB2 and is it a committee? WR1 target rates to identify target hogs versus evenly shared target share, etc) - Samples of RotoViz: 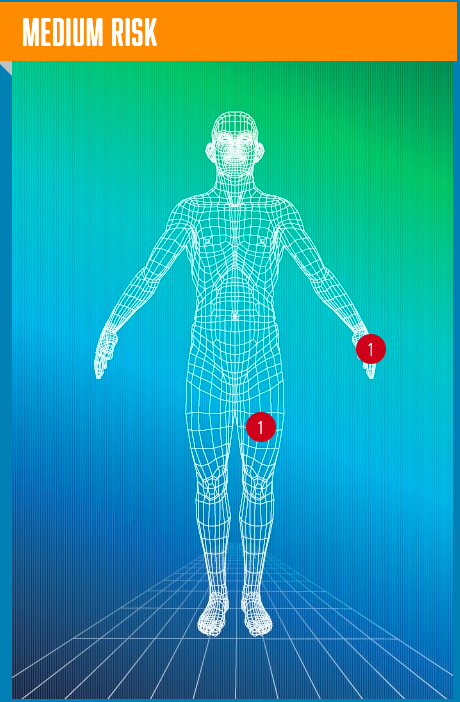 Dev ? -  Possible to get the Category numbers and the graphic ^^^^ linked to some sort of Stock Score Spreadsheet that we edit & the changes just get auto-made instead of us re-entering everytime we adjust?

Bottom Line: Ezekiel Elliott has been the pinnacle of consistency since joining the NFL. In 56 career games, he's been an RB1 a whopping 64% of the time, and a Top-24 RB in 93% of games -- only 7% bust rate. A picturesque combo of Talent + Usage, Zeke has averaged 25.25 opportunities (atts + tgts) and 125.4 total yards per game, facilitating RB3, RB3, RB6, and RB5 in PPR FPPG finishes over his four year career. Floors simply don't get higher, especially at the inconsistent RB position.

In 2020, some are concerned Zeke will be playing in a new offense for the first time in his career, especially since new HC Mike McCarthy has a pass-heavy history. Don't be. Outside of his mismanagement of Aaron Jones in 2017-18, McCarthy has ridden workhorse-level talent into the ground when it’s provided, as Ricky Williams and Deuce McAllister averaged 395 touches under his watch. In addressing Zeke, McCarthy gushed, "He’s going to get the football... We clearly understand what we have here and how we could build off of that.” With CeeDee Lamb's addition, this Cowboys offense projects to be the most explosive Zeke has ever played within, elevating his scoring opportunities and overall ceiling, while minimizing defensive attention. Floors and ceilings don't get higher, and Zeke should be ranked as highly as any player not named Christian McCaffrey in 2020.

*Note - Floors are done without injuries in mind. Of course the lowest floor is torn ACL first play from scrimmage. This assumes 16 games