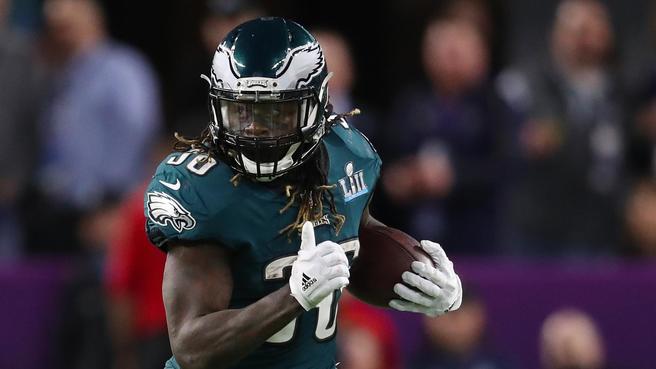 The Super Bowl Champions have some adversity to overcome early on in the 2018 season. An MVP QB not cleared while being replaced by a Super Bowl MVP. The top WR will be out for a few games, while the team relies on their “new” RB and elite TE.

The biggest storyline this offseason has been the question surrounding the Eagles starting QB in Week 1. It was recently announced that Nick Foles will start the year at QB since MVP candidate Carson Wentz is still not cleared for contact. That should drive Wentz’ stock down a bit, but when he returns full healthy, he should be good to go and making magic similar to his magical 2017 run. The only concern I would have would be if they dial back Wentz from scrambling which lead to his last ACL injury. It also means Foles is a guy you can pick up to use early on despite his shaky preseason appearances.

After being traded to the Eagles midway through 2017, we loved what was in store for Jay Ajayi and we still do this year. The departure of Blount should help give more carries to Ajayi, as well as Wentz starting the year on the sideline. You’d think Ajayi would be leaned upon rather heavily early on. That leaves the duo of Corey Clement and Darren Sproles to make an impact at some point. Clement showed his skill receiving the ball out of the backfield with a long touchdown catch in the Super Bowl. We also know what Sproles is capable of, despite his age being a terrifying number for a guy that small.

The recent news of Alshon Jeffery being ruled out for Week 1 darkens the cloud of his injury and how long he could potentially be out for. Jeffery was the stud receiver of the team which should allow for Nelson Agholor to assume the role early on and carry some big time value. There won’t be a lot of other competition for pass catchers, but both of these guys will be of value when Wentz is fully back and everyone’s healthy. The team also welcomed Mike Wallace to the fold as a deep ball threat. Wallace has always had elite speed and uses that to burn secondaries for long scores. He could be a penny stock for Foles’ big arm and the absence of Jeffery early on.

The real horse of this offense comes from TE Zach Ertz. Ertz exploded last year making his way into the “elite TE” tier. He was basically the equivalent of a stud WR1 that was often drafted in the middle/later rounds of drafts. Doug Pederson’s offense allowed Ertz to be a big playmaker, and he’s very likely going to be another force this year as well. Last year, even Trey Burton had some moments before signing in Chicago. Rookie first round pick Dallas Goedert is a deep sleeper or penny stock to monitor incase anything happens to Ertz, or if they start using both tight ends more often.

Best offensive line in football. The Eagles rank #1 overall thanks to complete cast of studs. The lowest graded starter was Stefen Wisnewski at 74.8 which is INSANE for a low score. Hopefully this means Ajayi will be able to feast behind such a dominant line.