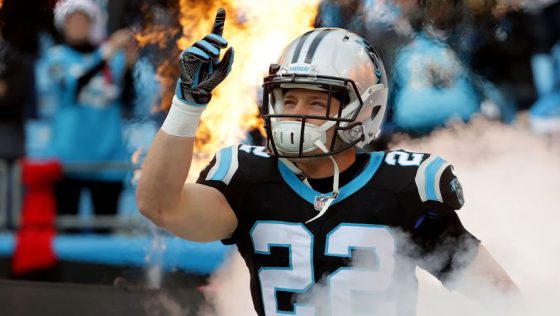 Will Cam return to his fantasy MVP form?

The Panthers have worked on getting more pieces around their franchise QB. With a big RB signing in the offseason, and drafting a WR with their first pick, this Panthers offense is trending up.

After an MVP 2015 year, Cam fell from grace in 2016, but bounced back very nicely in 2017. He’s struggled with the amount of talent the team has had at receiver, and has more than made up for it with his legs. Fantasy owners were concerned that Newton’s rushing attempts would drastically decrease after his concussions, but he’s still scrambling around because that’s what makes him so good. Carolina has made a point to add more weapons at receiver which should help Newton’s passing numbers, and he’s still going to be picking up first downs and touchdowns with his legs. He’s a great fantasy QB option.

No single player has single handily improved their draft stock more this preseason than RB Christian McCaffrey. The Wolf was notably down on him in his first Market Report after questioning his usage in the Panthers offense and the teams signing of CJ Anderson. That all went out the window when games started being played and CMac DOMINATED first team touches for Carolina. He was being fed the ball like crazy both in handoffs and on short passes out of the backfield. He was bursting through holes in the middle of the line like never before, and he was basically Options A, B and C for Carolina’s 1’s. Coaches had said they were hoping to get McCaffrey 250-300 carries this year which seemed unfathomable, but now is looking like it could be reality. Add in the amount of balls he catches, and he’s flying up Wolf’s draft board into the first round. If he is available to you in the second round. Take him immediately.

Anderson was looking to have the inside track to early down work as the lead back for Carolina, while McCaffrey was able to do his thing with a few rushes here and there and catching passes. Now it looks like Anderson is going to be fantasy irrelevant unless McCaffrey goes down with an injury. Anderson is a solid handcuff option and definitely someone to grab if you are fortunate enough to get McCaffrey.

After the trade of Kelvin Benjamin last year, the Panthers receiving core was very thin for Newton to work with. Lead receiver Devin Funchess finally stepped up and started to produce for the Panthers finally hitting triple digits in targets. The fact that he also appeared in all 16 games was big for him as everything from his targets, receptions, yardage and touchdowns all doubled to respectable numbers. He should be the defacto WR1 for Carolina, and falls probably into a WR3 territory for fantasy owners.

The team did spend their first pick on receiver DJ Moore who is looking to play a big time role. The kid has serious talent, and is going to be thrown out there on the field from day 1. It’s going to be tough to gauge how much he can do in his initial year, but he’s got value in later rounds. Another guy with late round penny stock value would be Curtis Samuel. The former second round pick was hurt most of 2017, but has the talent to be used all over the field. He’s a deep sleeper for Carolina.

One of the premiere tight ends for a decade now, G-Reg has been a mainstay for the Panthers. His season was cut short with a foot injury, but had wrapped up three straight years of 1,000+ receiving yards with 100+ targets. Sure the Panthers added some more receiving depth, but Olsen is still the best option Newton has and also has the highest chemistry of them all. He’s highly ranked for fantasy TEs, and as long as he stays healthy he should live up to that price tag.

The Panthers offensive line is nothing to write home about. Checking in at #21 overall per PFF, they took a huge hit in the offseason losing guard Andrew Norwell to the Jaguars. The right side of the line with Trai Turner and Daryl Williams is solid enough, but the remainder of the line really needs to step it up for Anderson and McCaffrey, as well as keeping Newton’s head intact.