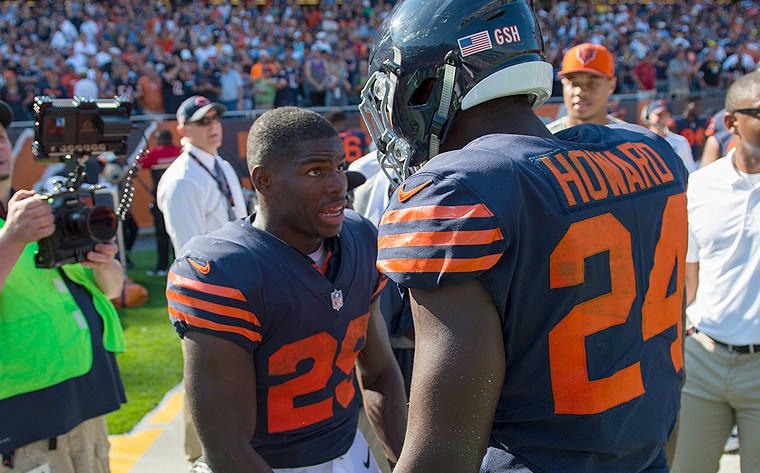 The running game should be lethal, but the passing game rests on Mitch Trubisky's shoulders.

The Chicago Bears come into the 2018 as the “all-potential team”. There’s a chance that the stars align and everyone outperforms their expectations to become a very surprising offensive team. There’s also the possibility that all this hype bursts and the entire team stinks once again. There’s a high ceiling and very low floor with this team all depending on the addition of coach Matt Nagy

The Wolf is expecting a sizable jump from second year QB Mitchell “don’t call me Mitch” Trubisky thanks to the addition of Matt Nagy. In 2017, he had no receivers whatsoever and his career high in passing yards is a whopping 314 yards. Basically it was abysmal, but the addition of new pass catchers and Nagy’s system makes Trubisky a late round flyer to hold onto as a backup QB to monitor.

The Bears have themselves a very nice RB duo to work with. Somewhat underappreciated, Jordan Howard continues to churn out impressive stats as his ADP still seems relatively low. He arguably has the most talent on the roster and was certainly the guy moving the chains in 2017. For someone going around the third round, I’ll take him there every time. The one concerning factor happens to be his hands for the receiving game which has led to talks about him not being on the field for third downs. The team has shut that down saying they expect and see Howard as a three down back who should see the field a lot. Then there’s Tarik Cohen. The human joystick was HUGE on Wolf’s preseason hype train which paid off insanely for Week 1 and pretty much Week 1 only. Nonetheless, he’s going to be a factor in Chicago’s offense as a valuable weapon and possibly increasing his workload going forward. He should see more snaps and targets lined up as receiver which will be huge for him in PPR formats.

The big addition to the receiving core and maybe the most questionable receiver to draft in fantasy this year is Allen Robinson. He was a BEAST in 2015, only to slow down drastically in ’16 before missing pretty much the entire 2017 year with a knee injury. He’s now back as the guy in Chicago’s passing game which could go so many ways. His ADP of roughly a 3-4 round pick is tough to decipher and many owners will pass just on the skepticism of his knee, new offense and down year in 2016.

The penny stocks in the receiving core though are rookie Anthony Miller and Taylor Gabriel from Atlanta. We know Gabriel has some serious speed that could open up the offense for Chicago, but we aren’t too sure what kind of role Miller will play going forward. And don’t forget about Kevin White, this could be the year he’s finally healthy! There are so many questionable pieces here, where if you are chasing the upside then Chicago is a place you’ll be looking quite often.

Burton signed from Philadelphia in the offseason, and The Wolf is really hoping that he can do in this offense what Matt Nagy made from Travis Kelce. Obviously the two are on different talent levels, but the system seems to be aligned for Burton to play a significant role in 2018. Burton has skyrocketed up The Wolf’s draft board thanks to his constant peppering in the teams preseason games thus far. He’s been the guy getting the most looks for Trubisky and the offense which we know from before aren’t too big on slinging it downfield. Burton looks like he’s going to be Trubisky’s favorite new toy and very well could explode in this offense.

Finally, we have a good offensive line. Checking in at #13, the Bears have mainstay Kyle Long while rookie James Daniels is looking to make a big impact at the left guard spot. A group of solid grades from PFF leads us to believe this group has done a very good job in opening holes for Howard to burst through, and can hopefully keep Trubisky upright going forward.