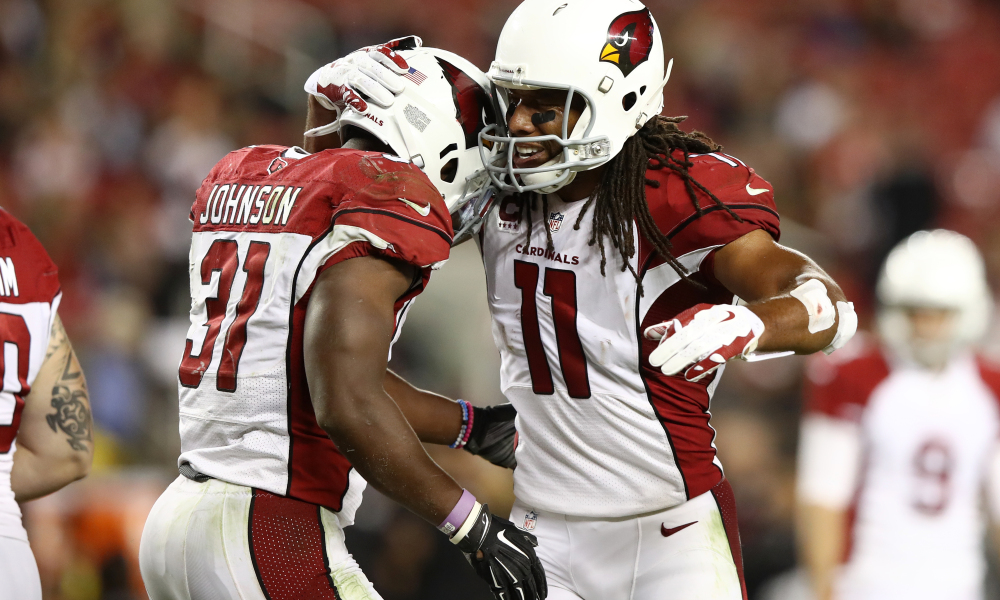 David Johnson and Larry Fitz should put some fantasy points up in the desert.

There’s not a lot of depth here in Arizona, but the desert does serve as home to one of the NFL’s elite RBs and an ageless wonder at WR that can still put up numbers with the best of them.

The retirement of Carson Palmer has ushered in the new era of QB in Arizona. The Cardinals decided to sign “Sammy Sleeves” Sam Bradford from Minnesota to start the beginning of the season. Bradford actually looked real good to start the year with the Vikings before his inevitable injury that will surely happen once again this year. Enter rookie Josh Rosen. Rosen is the future and will very likely get to start a handful of games this year for Arizona. Neither of these two are draft-able in fantasy, but if Rosen takes over and excels, he could be a waiver add.

There’s not too much analysis to do here, as we know just how damn good DJ is in Arizona. He’s coming off his wrist injury from Week 1 in 2017 that derailed his entire year so you’d have to think he’s hungry to come out and shred. He could very well record 1,000 yards both rushing and receiving while topping close to 100 receptions. He’s a true workhorse that is so rare now-a-days in fantasy football. The only question mark we have here is the loss of Coach Bruce Arians. Arians rode his horses like no other, so we’re hoping the change to Mike McCoy doesn’t affect Johnson’s touches going forward.

The ageless wonder Larry Fitzgerald continues to get it done, and there’s no signs of stopping anytime soon for him. I anticipate Bradford targeting Fitz over and over to start the season, seeing as the remained of the Cardinals receiving core is nothing to write home about. Fitz has recently been one of the most underappreciated WRs in fantasy, but now he’s working his way back into 3rdround territory. People get scared of the age, but he has hands of gold.

The interesting one to keep an eye on is rookie Christian Kirk out of Texas A&M. The uber athletic receiver has serious potential to play opposite Fitzgerald with what we hoped the likes of John/Jaron Brown could have done. Defenses are likely to try and key in on DJ and Fitz, so Kirk might be able to capitalize on a smaller spotlight.

RSJ is a tight end that we have our eyes on this preseason as he certainly showed signs of talent in 2017. Unfortunately, he’s run into some trouble with the law that hopefully won’t impact his season. We saw last year what Bradford did with Kyle Rudolph, as he’s always been big with his TEs. RSJ has some serious potential if he can stay on the field and Bradford remains healthy.

Yeeesh, this offensive line flat out is not good. Injuries have plagued them in the past, and if everyone can manage to stay healthy, well then they should take giant steps forward. Unfortunately, that’s a huge if, which leaves them ranked #27 overall by PFF.