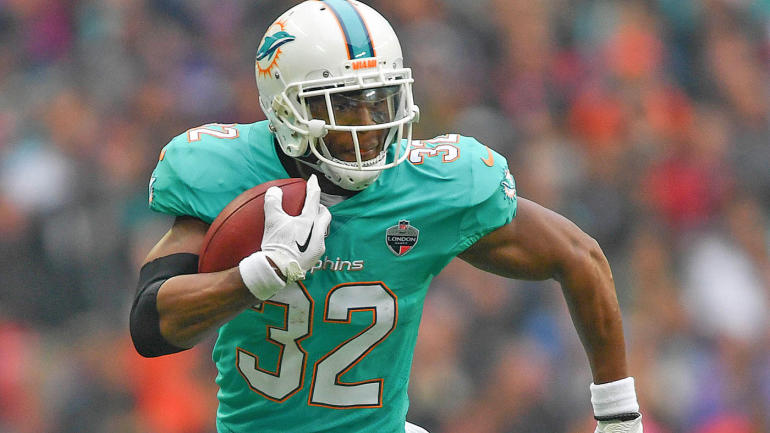 Could a healthy Ryan Tannehill wake up a sleepy receiving corps?

Last season was a disaster for the Miami Dolphins as their starting QB went down for the year before the season even kicked off. This brought former retired and now reality television star Jay Cutler back to the NFL for a starting gig in South Beach. The team had plenty of talent, but just missed out on the playoffs as they weren’t able to put it together.

The true question will be how Tannehill recovers from his knee injury. He’s never been a great fantasy QB but had been working towards three straight years of 4,000 passing yards and around 25 touchdowns. He’s too big of a question mark to draft right now, but could maybe be a bye week filler. Especially with his top wide receiver gone.

Once Jay Ajayi was traded to the Eagles, Kenyan Drake took over as the team’s lead back and soared. His first two games he went for 23-120-1 and 25-114-0 with the latter including a 5-79-0 receiving line. Very impressive for his first real action into the NFL. Now there are plenty of questions going around about Drake’s ability to be an every down back in Miami. Me personally, I’m higher on him than most sites and rankings seem to be. Hell, he was great in DraftKings whenever I rostered him. I think he can be a solid RB2 and a great flex RB.

The team decided to add old journeyman Frank Gore to the roster which could eat into Drake’s workload but Gore has to come to a stop at some point. He would be a decent handcuff to Drake late in drafts or a guy to watch in free agency. The real back to monitor here though is rookie Kalen Ballage. He’s “built like a house” apparently and could be a real bruiser if Drake really struggles in the lead role. He certainly has more upside than Gore this year.

We’ve been waiting for DeVante Parker to breakthrough for a few years now that my patience is running out. Obviously the departure of Jarvis Landry opens up a TON of targets to be spread around, but Parker never really flourished or sparked as the WR2. With an injury sidelining him for some time now, his stock is surely to plummet. He’s a guy I’m going to avoid in drafts, because I would much rather have Kenny Stills on my team. The two have put up very similar stats in their three years in Miami (excluding touchdowns where Stills excels), but Parker has always had the much higher ADP based on his potential. The gap is starting to close, but Stills will always be one of the better later round steals in fantasy if you ask me.

I’m intruided to see newcomer Danny Amendola in Miami. He worked his dick off in New England and was never truly compensated for it which isn’t really surprising. Unfortunately, he’s a better football player than he is fantasy football player. Making the tough and super clutch catches when the team needs them. The stat line isn’t always sexy, but he sure as hell is. He and Albert Wilson have late round/free agency value.

Fantasy owners will be hoping that Mike Gesicki is everything that Jordan Cameron should have been when he signed with Miami. Playing with Saquon Barkley at Penn State, he showed to be an athletic freak at TE, hoping to make an NFL impact in short time. There’s potential in Gesicki here, but it’s going to be tough to roster him right away. He’s definitely someone to either stash or keep a close eye on the first few games.

The Dolphins come in ranked with the 20th best offensive line of 2018. It needs some help, and the departure of center Mike Pouncey won’t be doing them any favors. It’s a line that’s not going to boost the value of its RBs and likely won’t crumble the value of everyone else.